Can You Charge an E-bike With a Generator?

Last Update On: January 22, 2023 // Article Written By: David Brayton
Affiliate Disclosure: As an Amazon Associate I earn from qualifying purchases.

“Can you charge an E-bike with a generator?” is a popular question often on the mind of every electric bike user. You don’t have to worry because in this piece, you will be learning the answers.

While electric bikes offers clean transportation benefits and easy means to work-out, charging concerns is a critical factor you need to take seriously. You have to charge your e-bike adequately if you don’t want to miss out of the thrills associated with electric biking.

Charging an e-bike becomes easy when you have a generator at your disposal. Electric bikes are electric versions of traditional bicycles developed with an electric motor. A generator generates electric power in large quantities, which should fully charge up your electric bike.

Can you Charge an E-bike with a Generator?

Electric bikes become a suitable option whenever summer approaches. It is that period of the year when both professional bikers and those who are just cycling the wheels for the first time put their bikes on the trail. Each time camping grounds open, there is just one perfect activity: e-biking. You can, however, have the most memorable experiences only when your electric bike has sufficient electric energy.

In order to provide your e-bike with sufficient electric energy, you need a generator. The generator offers the perfect way to get your electric bike charged without necessarily having to go through a lot of stress. The only but in this case is that not all types of generators can charge an ideal e-bike. The generator’s power must be proportional to the power of the electric bike to charge fully.

It is no new news that the rate at which you use your e-bike has a lot of effects on its lifespan. The more you use your e-bike, the more it loses its value. If you choose to go wild, you make it more vulnerable to risks. Charging becomes an option and an unavoidable one, particularly when you use it often. It would help if you supplied it with adequate energy to keep it working. That is possible with a well-powered generator.

There are always several concerns whenever it comes to using a generator to power an electric bike. First off, you need to know the amount of wattage you need the generator to produce to power your e-bike fully. Apart from that, you also need to know the type of generator that will produce the required power to charge your electric bike. The concerns even go beyond that. But you don’t need to worry; this piece has got you covered.

This measure should not get you confused. In a more relatable term, make sure the generator has at least 25 percent more power than the electric bike. With such a generator at your disposal, your e-bike should get sufficient energy to power up. The size of the electric bike does not matter in this case. A high-power generator will perform the task, whether it is an electric bike for a tall man or any other person.

How Many Watts Do You Need To Charge An E-Bike Using A Generator?

To power an electric bike, you need a high-power generator. That goes without saying that you need to check your generator’s wattage and compare it to that of your electric bike. If it has sufficient electric power, that’s a good place to start from.

Measuring the wattage of electric energy that will fully charge your electric bike can be challenging. But it should not be that demanding since each generator comes with the wattage description. So, the equation follows a rather simple approach: the higher the wattage of your generator, the more power your e-bike will get.

Let’s take a mathematical approach to explain the subject. If your generator produces 800 watts, for instance, the electric capacity of the e-bike you will be using it to charge must not exceed 800 watts. The electric bike’s wattage must be relatively minimal compared to that of the generator.

You should also know that some generators possess the capacity to generate as much as 2000 watts. These types of generators can power two electric bike batteries at the same time without running out of electric energy. Your chances are even higher when you have a generator with a 3500 wattage capacity.

What Do You Need To Charge An E-Bike?

Usually, the first question you will come across as you zoom past the frequently asked questions about e-bikes is “can you charge an e-bike using a generator? “. The problem here isn’t that generators are less capable. The primary issue is that the generator can’t do it all alone. There are certain things you need to get together before attempting ng to use a generator to charge your e-bike. 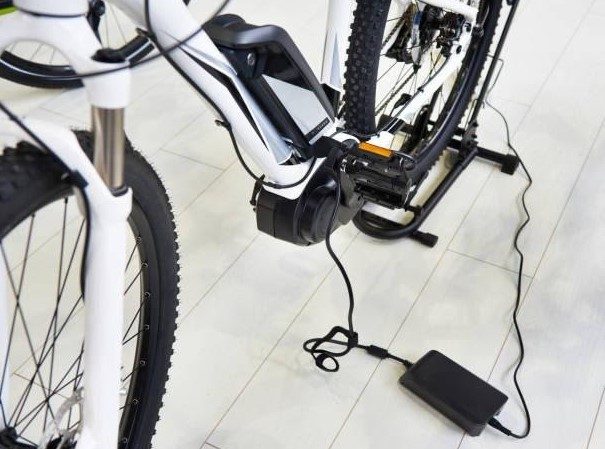 To complement that, you will need power outlets. If you are a fan of the summer camp, you should know a lot about power outlets because that is where you will likely find them the most. If you do not see a power outlet at a campsite, you might not spend up to 48 hours before returning home due to charging failure. In addition, you need a power grid. Power grids give off high-quality electric power.

The charging process becomes easy and convenient when you put all these together, coupled with your generator. Of course, you should make your generator available to do the job. So, the generator is also one of those things you need to get if you want to charge your electric bike.

How To Charge An E-Bike Using A Generator

When you notice that you can no longer cycle at high speed, you should know that it’s high you charged the battery. Charging an electric bike should be less stressful when all the necessary items are in place. You will enjoy the process, even more when you take the measures seriously. So, let’s get down to how to charge your e-bike with a generator.

Without further delay, your battery should begin to charge immediately. You might want to reduce the risk that comes with direct current. For that reason, you can allow about 15 minutes to expire after you turn on the generator before the connection. With these simple steps, you have solved the puzzle surrounding the high-rated question: can you charge an E-bike using a generator?.

How Long Does It Take To Charge An E-Bike With A Generator?

Time is one factor that you can’t predict, especially when it has to do with charging an electric bike. This is because more than one factor influences the time it takes for your electric bike to charge when you’re using a generator fully. These factors have high impacts. They either make the process last for a short time or make it last for an extended period. Some of these factors include the following.

Charging an E-bike with an Inverter

Puzzling as it may look, an inverter offers an alternative way to charge an electric bike. An inverter should be more than enough to charge your electric bike. Inverters come in different sizes, and this makes them suitable for the task. The sine wave inverter is a popular choice. This can generate up to 1500 watts. Of course, that should be enough to power your e-bike’s battery.

Using an inverter saves you a lot of stress, especially if you are a fan of outdoor e-biking. This means that you will always be far from the electric outlets. For a large number of e-bikers, the solution lies in taking extra batteries when going for the ride. However, this can be uneasy. Since you are out there to have some fun, you don’t need such a load. Instead of extra batteries, go with an inverter. With that, you can charge your electric battery successfully.

Just as in the case of using a generator, you also need to check the inverter’s capacity before using it to charge your e-bike. Once the wattages correlate, you can make the connection. An inverter charger should help you connect the electric bike directly to the inverter. You don’t need too many things when using an inverter.

The right answers to the mind-boggling question: ”can you charge your e-bike using a generator?” is now at your fingertip. It all begins with finding a generator with sufficient electric energy to power the e-bike. How long it will take to fully charge highly depends on factors such as the generator’s capacity, the e-bike’s battery’s capacity, and others.