Electric Bike Laws In Michigan: An A-Z Guide for 2023

Road accidents are never predictable, so governments put measures to curb carelessness when on the road. Apart from car accidents, e-bikes can cause mishaps too. That’s why there are also laws governing such bikes on the road.

However, different states have different rules and regulations. So, if you’re considering buying an e-bike in Michigan, you need to know the Electric Bike Laws in Michigan.

For any e-bike to be permitted in Michigan, it must follow three main laws. First, it must have a saddle or seat for the rider. It must also come with fully functional pedals, and lastly, it must comprise an electric motor with maximum support of 1 horsepower (approximately 750 watts).

Also, some factors determine whether you can ride an e-bike on a trail. These include the e-bike’s class, the kind of trail, and the authority that governs the trail that permits such use. This article will discuss all of these points in detail for more clarity.

Is It Legal To Ride An Electric Bike In Michigan?

In Michigan, riding an electric bicycle is permitted and legal provided the bike follows the traffic laws. The e-bike must comply with the three conditions for a bicycle to be recognized as an e-bike in Michigan. Also, the electric bike must be under one of the recognized e-bike classes in the state.

It’s natural to find a rider with a regular bicycle on road. But you can’t say the same for e-bikes. In Michigan, an electric bike rider has to obey traffic laws. They still need to be aware of other commuting vehicle on the route and comply with traffic regulations.

Pros And Cons Of Electric Bike Laws in Michigan

Enforcing a law on the maximum speed electric bikes can travel provides road safety for all road commuters. With lesser traveling speeds on e-bikes, both bikers and other commuters can comfortably move about. Therefore, reducing the chances of accidents.

The majority of teenagers and youths love riding their bicycles at top speed, making them the most likely for accidents.

Besides enforcing a speed limit on e-bikes, the local authority also enforces regulations on teenagers below 18 years to use helmets while riding. This also reduces the chances of accidents and fatal injuries if accidents occur for the younger teens.

While commuting at low speeds, riders stand lesser chances of encountering accidents. Most often, accidents are two-sided, affecting humans and the environment. With lesser accidents occurring within the state, the environment and its resources are preserved.

The law shows you a blueprint of where you can tour with your e-bike. This makes it much easier for riders to use trails that align with the classes of their bikes.

The Michigan Law informs e-bike riders of locations within the state that is permissible for riding. It also informs them of locations that are unsafe and unauthorized for riding.

Another uninteresting limitation of the Michigan law is that it restricts riders from riding on certain trails. As some locations as marked as non-motorized trails, e-bike riders are not permitted to ride on such locations.

There are only three (3) classes of e-bikes that are permitted on all trails where commuters can ride a regular bicycle in Michigan. They include: 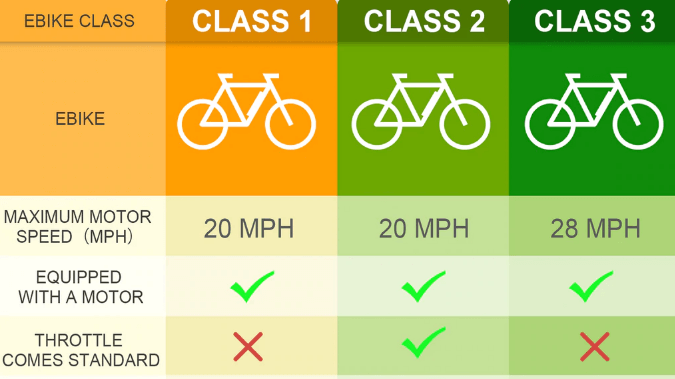 Class 1 comes with a motor that gives pedal assistance as the rider pedals and terminates assistance when the rider’s speed reaches 20MPH.

This class of e-bikes comes with an electric motor that can autonomously propel the e-bike, with or without the mechanical effort of the rider. The Class 2 e-bike also provides a maximum speed of 20MP and ceases when the rider applies brakes or releases the throttle.

The Class 3 e-bike comes with an electric motor that provides pedal assistance only when the rider is pedaling. Also, it ceases when the rider reaches a top speed of 28MPH.

Riders don’t need licenses, registration, or insurance to use any e-bike in the above-listed categories. But, the minimum age for an e-bike rider must be what the State stipulates.

In several states in the United States, there are several misunderstandings about whether an e-bike is considered a vehicle. Thus, it’s much harder to regulate e-bikes in these states, as many individuals understand the laws to restrict only vehicles with engines like scooters or mopeds.

However, these regulations weren’t designed to extend to electric bikes, causing quite a large confusion for riders and retailers. That’s why it’s very important to understand the present legal regulations that govern e-bikes within the country. 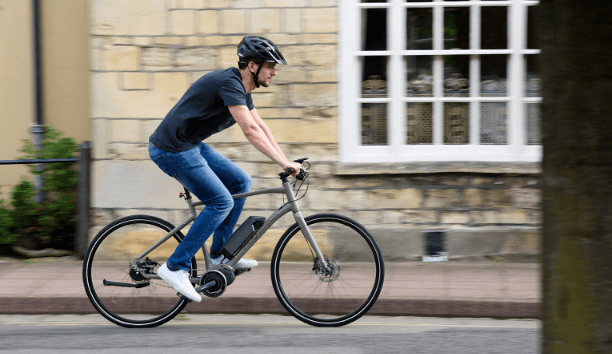 Since 2002, electrically-assisted bicycles have been recognized and federally regulated. Public Law 107-319 stated that e-bikes are governed as consumer goods under the Consumer Product Safety Acts. More specifically, it established that they are categorized under the same regulations that rule normal legacy bicycles.

Therefore, e-bikes are under the Consumer Product Safety Commission and must follow suit with the safety standards for bicycles at 16 C.F.R. Part 1512.

Furthermore, for the sake of federal law, e-bikes are not exactly “combustible-engine motor vehicles” and can’t be under the vehicle standards of the National Highway Safety Administration.

To be more practical, Public Law 107-319 makes sure that e-bikes are designed, created, and tested the same way as regular human-powered bikes. This way, the bikes can fulfill consumer product safety regulations. The 15 U.S.C. § 2085 holds the main provisions of Public Law 107-319.

The federal law classifies and calls an electric bicycle a “low-speed electric bicycle.” This is known as a “2- to a 3-wheeled vehicle that comes with totally operable pedals and one or more electric motors with a top power of 1hp (750 watts). Also, whose top speed on a leveled surface, and powered only by the electrical motor by a rider that weighs circa 170lbs, is not up to 20mph.”

Thus, we can see from the given definition the top speed an e-bike can move when relying solely on the motor.

However, it doesn’t give a max. speed for pedal-assisted riding, when the e-bike’s motor is assisting the rider to facilitate movement. The federal law doesn’t inhibit any vehicle codes or traffic laws.

Also, although there’s a prevention provision in Public Law 107-319, that provision offers a constrained scope to product safety restrictions.

Where Are E-bikes Allowed In Michigan?

All three calls of electric bicycles are permitted on all roads where regular, non-electric bikes are supported. Furthermore, you can ride an e-bike on any side of the highway that permits a non-electric bicycle. This includes a lane specified for exclusively using bicycles on the shoulder.

Linear and Rail Trails in Michigan

Class 1 electric bikes are supported on linear trails (or rail trails) that comprise crushed limestone or asphalt surfaces, except restricted otherwise. State agencies may prohibit or enforce regulations on the use of this class of electric bikes on a trail. Here are some rail trails you can ride your class 1 e-bike.

Except authorized by a local agency or authority, you may not be able to ride a class 2 or 3 electric bike on a rail trail. Usually, the local authority awards this authorization when it verifies that you can effectively maneuver the trail.

Natural surface trails are allocated as non-motorized trails. They include mountain biking and hiking. No electric bike is authorized on these trails, except in cases where the local agency governing the trail gives authority to use.

To reemphasize, e-bikes are considered “low-speed electric bicycles.” Also, you can use them in any location a non-electric bike is permitted. So, they both share a majority of rules, except ones concerning speed limits.

Electric Bike Laws in Michigan. For a bike to be considered an electric bike within Michigan, it must have a seat for the rider, functional pedals, and a max of 750 watts of power. The Michigan law provides safety to riders and the environment, riders below 18, and other commuters. But, it also limits the maximum power you can use on a trail.